‘The City of lakes’ was founded back in 1553 by Maharana Udai Singh of Mewar. Later, the city was named after its king. Earlier, Chittorgarh was the capital of Mewar, but Udaipur city was then just a fertile land, giving enough reasons to be declared as the capital city by the king. The major reason behind Udaipur been shifted to being the capital was because the king wanted a more secure land for his kingdom. The eastern side of the Pichola Lake was chosen to build the main palace, which is now known as The City palace.

An educational trip was organized by the Institute, India Today Media Institute, for a week, to Udaipur, Mount Abu and Kumbhalgarh. I was fortunate enough to stroll around the city and capture some of the remarkable moments of the city, every picture having a story of its own.

Found this old fellow on the streets of Udaipur, on the very first day of the trip. Even though he is paralysed, he does not want to give up on life. He earns his livelihood by begging. His name is Munshi and earlier had no wheelchair. The Municipal Corporation had been very helpful to this man and gave him a wheelchair that now has become his life.

We also got a chance to visit the Vintage car museum near Hotel Vishnupriya, which belonged to various kings of Rajasthan. The cars of the royal families gave us an insight into the lavish life of the kings. The place is highly recommended for tourists. The famous Udaipur palace which is the 2nd largest palace of India was the next sightseeing place from the bucket list. The king used to enjoy the grand view of Udaipur city from the top of the palace. As we all know Jaipur is called Pink city for the pink colour of its buildings. Similarly,Udaipur is also famous for its white colour buildings and is called white city. 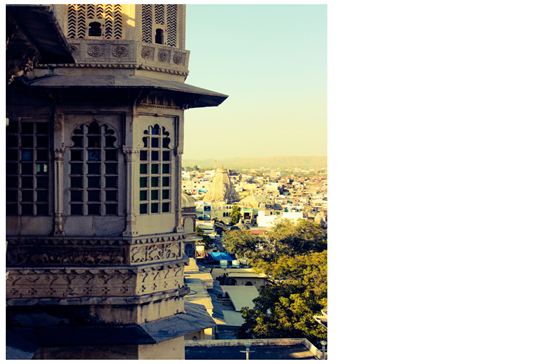 The palace revealed the architectural beauty of the time and is an engineering marvel. The fountain in the picture below, was created without any modern equipment and works without any electricity or motor.

The picture shows the view of rani kaksh, where the queen spent her time with her servants and were able to enjoy the view of the whole city. The palace sure looks stunning during the daytime. The well lit up palace, at night, makes it more alluring for the visitors. I had tried to capture this picture from the Pichola Lake. Boating facilities was  available for those who want to take a closer look and intricacies of the palace

At the end of day 1, we also saw the Taj Palace Hotel in the midst of Pichola Lake. It is one of the most luxurious hotel across the world. The panorama of the place itself left the visitors spellbound.

After taking a tour around the city, the fancies of the place filled our heart with ecstasy. After dining together, we took back our tired souls back to the hotel room and called it a day.

About the author : Vikas Mavi and Banhishikha Banerjee are the trainees in India Today Media Institute

Disclaimer : Any views or opinions represented in this blog belong solely to the writer and do not represent those of people, institutions or organisations that the owner may or may not be associated with in professional or personal capacity, unless explicitly stated. Any views or opinions are not intended to malign any religion, ethnic group, club, organisation, company or an individual. All content provided on this blog is for informational purposes only. The owner of this blog makes no representations as to the accuracy or completeness of any information on this site or found by following any link on this site.